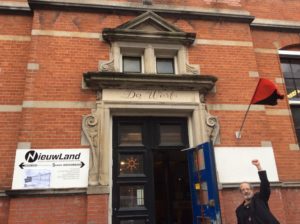 Conceived as a primary school in 1893, Pieter Nieuwlandstraat 93-95 is built in the same period as the rest of Dapperbuurt, and it is one of the few original buildings left in the direct surroundings. Its striking red brick façade is classified as a municipal monument, behind which is housed 1’155m2 of indoor area and a backyard of 130m2. During the 1980s, when the neighbourhood was going through a massive reconstruction, the building itself was renovated. Replacing the school with a ‘multifunctional center’, the west wing of the ground floor became the neighbourhood center De Werf, which was later absorbed by the welfare organisation Dynamo. The other parts of the building were used as offices, interim school and child day care center. After Dynamo and the day care center left, the building was rented out temporarily as office spaces and was underused for most of the 2000s.

Soweto is a social housing association founded by housing activists, currently with more than 100 members. Rooted in Amsterdam’s squatter movement, the erosion of social housing policies and criminalisation of squatting prompted the creation of a long-lasting organisation, based on solidarity, sustainability and self-management. After years of legal, bureaucratic and financial heavy lifting, and undeterred by an unsuccessful attempt to buy another building in the neighbourhood, Soweto finally successfully acquired NieuwLand in November 2015!

The building is rented and operated by three associations independent from Soweto, each with its own organisational characteristics; the 11-member living group, the community-driven volunteer-based public space, and the building bringing together all the parties. Soweto is a member of the Mietshäuser Syndikat, as well as in solidarity with similar organisations. Do you want to start your own living group or collective project? Soweto can assist you take the first steps to launch your initiative.

Guided by the professional support of the architect and executed by countless volunteers, the school  had to be adapted for domestic use. Undusting a century-old attic and undoing a (quite terrible) 80s-style renovation —not the easiest task, especially when aiming for achieving better results than social housing standards. Walls were built, pipes were laid, even roof extensions added and the central heating overhauled. Most of the work took as much as two years of slow but steady effort of its inhabitants, but the results are proudly superior to anyone’s expectations!